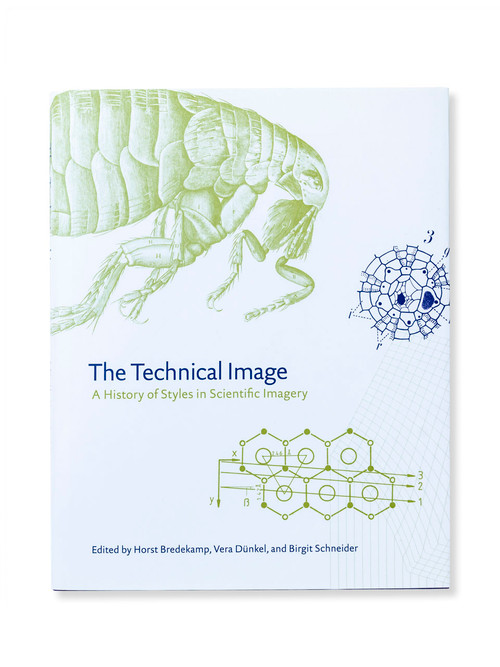 The Technical Image: A History of Styles in Scientific Imagery, edited by Horst Bredekamp, Vera Dünkel, and Birgit Schneider

Co-Published with the University of Chicago Press

In science and technology, the images used to depict ideas, data, and reactions can be as striking and explosive as the concepts and processes they embody—both works of art and generative forces in their own right. Drawing on a close dialogue between the histories of art, science, and technology, The Technical Image explores these images not as mere illustrations or examples, but as productive agents and distinctive, multilayered elements of the process of generating knowledge. Using beautifully reproduced visuals, this book not only reveals how scientific images play a constructive role in shaping the findings and insights they illustrate, but also—however mechanical or detached from individual researchers’ choices their appearances may be—how they come to embody the styles of a period, a mindset, a research collective, or a device.

Discourses about Pictures: Considerations on the Particular Challenges Natural-Scientific Pictures Pose for the Theory of the Picture
Gabriele Werner

A History of Styles of Technical Imagery: Between Description and Interpretation
A Conversation with Horst Bredekamp

Beyond the Icons of Knowledge: Artistic Styles and the Art History of Scientific Imagery
Matthias Bruhn

Interacting with Images—Toward a History of the Digital Image: The Case of Graphical User Interfaces
Margarete Pratschke

Thinking with Models: On the Genesis of James Watson’s Molecular Biology of the Gene
Reinhard Wendler

In the Eye of the Beholder: Emanuel Goldberg’s Apparatuses at the International Photographic Exhibition Dresden 1909
Franziska Brons

X-Ray Vision and Shadow Image: On the Specificity of Early Radiographs and Their Interpretations around 1900
Vera Dünkel

Instrument-Aided Vision and the Imagination: The Migration of Worms and Dragons in Early Microscopy
Stefan Ditzen

Drawing and the Contemplation of Nature—Natural History around 1600: The Case of Aldrovandi’s Images
Angela Fischel

Mirjam Brusius, University of Oxford, on the German edition | British Journal for the History of Science
“Not only is the objectivity of scientific images . . . challenged, but the accounts here of technical histories, evaluation practices, iconographical traditions, and modes of perception make even clearer the constructive character of the images. For all that such images are expected to be self-evident and to follow rules of repetition and verifiability, like experiments, it is nevertheless—or, even better, therefore—the case that manipulated images often generate better scientific results in the eyes of the scientists. . . . The volume deserves to be treated as an indispensable research tool.”
John Harwood, Oberlin College | author of "The Interface: IBM and the Transformation of Corporate Design"
“The Technical Image concretizes the beginnings of a long-term intellectual project of outstanding importance: the interdisciplinary melding of methods from art history, media studies, and the history of science to produce a new body of scholarly literature on imagery generated in the contexts of ‘pure’ and ‘applied’ scientific research. The illustrations are excellent, the translations are very good indeed, and the glossary will be invaluable to undergraduate and graduate students alike as they begin to navigate the rich interdisciplinary literature now emerging on the interactions between the history of art and the history of science and technology. The pointed and even controversial texts in this volume will serve in the Anglophone academy as a point of departure for a renewed debate in numerous fields that is already well under way in the German-speaking context.”
Omar W. Nasim, University of Kent | author of "Observing by Hand: Sketching the Nebulae in the Nineteenth Century"
“By way of direct and empirical engagement with materials and forms that make up an image, general issues emerge that go into informing and shaping the study of technical images. Among the most important of these general issues is the notion of style. As an art-historical category, style thus reemerges in the context of technical images. This book does an excellent job of not only expanding the study of the image in the history and sociology of science more toward art history’s veritable and long engagement with the image; but also conversely, it succeeds in explaining what art history takes to be an image. Visually exciting, interesting, and engaging.”

Horst Bredekamp is professor of art history at the Humboldt University of Berlin and a permanent fellow of the Institute for Advanced Study in Berlin.

Vera Dünkel is a research affiliate with the “Das Technische Bild” research project.

Birgit Schneider is the postdoctoral fellow of the Fritz Thyssen Foundation at the Institute for Arts and Media, University of Potsdam.